Home » Mobile Gambling Industry Boom in the Next Five Years

Mobile Gambling Industry Boom in the Next Five Years

September 3, 2012 Posted in Uncategorized by Adam • No Comments

İdil The mobile gaming industry and mobile casinos will continue to flourish in the next five years, till 2017. According to a report released by Jupiter Research, the mobile gaming market will escalate from its present $13 billion every year to about $100 billion by the year 2017. Mobile betting at the sportsbooks is expected to rise to about $45 billion by the year 2017. After this, mobile gambling will be the biggest component of the gaming boom on tablet and smart phone devices. 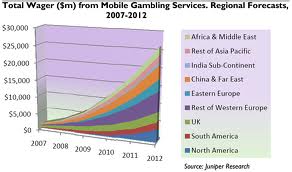 http://clydecoastgolf.com/data/s.asp The boom of mobile betting

The development of mobile betting has been exponentially increasing for many years now, with Paddy Power and Ladbrokes reporting 40 % rise in the online sports wagers placed on mobile devices. Christopher Griffin, who is the Chief Executive of Betable, explained the rapid increase in smartphone and table technology as the prime breakthrough for gambling industries online. This is also a great opportunity for game builders, he added.

Most gambling establishments have started driving their chips to the middle of the table. Firms like Betfair Group and William Hill have already started using iPhone applications to offer their casino games. In the coming year, numerous other casinos are predicted to follow suit.

It is predicted that mobile gambling through tablets and iPhones will increase to $100 billion by the year 2017, which was around $20 billion in 2011. This will be supported by the rise in the social gambling activity and other lottery services. In most ways, people have realized that a smart phone is the right device for gambling. So, more and more people from across the world have started signing up for casino games from their tablets and iPhones.

Though the laws in the US are against online and mobile gambling, they can at least be slightly changed and modified so that players in the US can wager using their smart phones. Windsor Holden, who is an analyst, said that the mobile gambling in the US might become legal since states like Nevada and California have started contemplating on new online gambling laws.