February 21, 2013 Posted in Uncategorized by Adam • No Comments 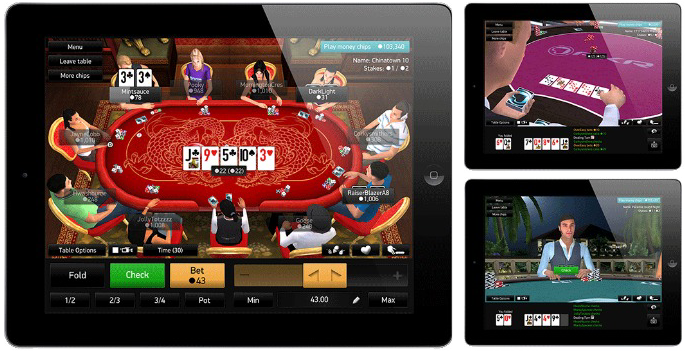 New app available initially only in the UK

This next-generation 3D iPad poker app supports real money cash games and sit n’go tournaments in Texas Hold’em, Pot Limit Omaha and Omaha Hi/Lo. Before joining the real money action players can harness their skills in free practise games which run around the clock. Advanced lobby filters make it easy for players to select their game type, stakes and table size or they can use the “Play now” for quick access to the most popular games.

The new app is available to download for free in the Apple App Store for iPad and iPhone 4 users. Android versions and app release in other regions outside the UK is being worked on and PKR has also promised to add multi-table tournaments in the future.

PKR COO, Leon Walters, who is leading the team that developed the new app had this to say during the launch:

“I’m very pleased to have launched the poker app after several months of hard work by the team. This release represents one of the most significant steps forward for PKR since our inception in 2006. We aim to quickly follow this first phase of our efforts t reach the growing mobile poker audience with iPhone and Android versions.”

Want to play with the new exciting PKR 3D iPad App? Sign up for a PKR playing account from this LINK and use bonus code “welcome5” when you make your first deposit of $10 or more and you’ll get an instant $5 Poker Bonus after only one raked hand!