Naturally, Aristocrat moved into the realm of online slots once internet gaming began to become big business and while they have never challenged the likes of Microgaming and NetEnt as the true behemoths of online gaming they have still maintained a respectable if niche position as one of the internet’s top online slots providers.

Aristocrat can trace its history all the way back to 1933, but it wasn’t until Leonard Ainsworth inherited the company from his father twenty years later that it turned its attention towards slot machines. At the time, slot machines were banned all across Australia, but Ainsworth gambled on the future legalisation of such gaming machines, and indeed New South Wales took the legalisation plunge in 1956. Aristocrat launched its first-ever slot machine, which was called ‘The Clubman’, in the same year.

Eventually more states legalised ‘pokies’ and Aristocrat’s fortunes severely blossomed. In the early 1960s they opened an office in Europe, and then moved into the lucrative US market in 1964 by selling their machines to Las Vegas casinos. The company eventually diversified into South Africa and Japan as well. Ainsworth resigned from Aristocrat in 1994 through ill-health, handing over control to his sons. Once recovered, a family-feud prevented him from regaining any influence in the company, and he instead started up a rival company of his own.

Aristocrat’s online slots portfolio consists of around thirty slots titles. They are all very similar – the classic three-line, five-reels pattern with multiple pay lines. None of Aristocrat’s slots could be said to be ‘3D’ video slots as they all follow a very traditional format. Among the casino favourites supplied by the company are Queen of the Nile (and its sequel – Queen of the Nile II), 50 Lions and Miss Kitty.

Aristocrat does not make online versions of table games.

Aristocrat does not make online versions of any other game aside from online slots.

At the time of writing, Aristocrat does not provide a live casino.

Aristocrat does not publish RTPs of its games. Some of the company’s games do have sizeable http://xjobs.org/ payouts, with the largest being provided by Big Ben at €30,000. While many of Aristocrat’s real-world slot machines provide progressive jackpots, none of their online games do.

Aristocrat is another company who only licence out their online games – they do not run online casinos themselves. 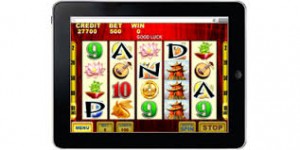 All of Aristocrat’s online slots can be played via a browser or within standalone, downloadable software. At time of writing eighteen of Aristocrat’s most popular titles were available for mobile play, but only on iOS-powered devices such as the iPhone and the iPad.

As Australia is a restricted market when it comes to online gambling, Aristocrat can perhaps be forgiven for concentrating almost purely on land-based casinos and falling way behind the rest of the online casino world when it comes to game provision. However, having said that, for a company that has offices in Europe, the USA, South Africa and Japan, having such a slim portfolio of around 30 online slots games is a little difficult to understand.

If you look at the company’s catalogue of ‘real world’ slot machines, you are left positively salivating at all the goodness that is on offer, so it’s even harder to understand why Aristocrat are not following the lead of companies such as IGT in particular and making more of an effort online. The answer may be that in Australia at least, the real money is to be made with real money machines in real world casinos, and in that case no blame can really be attributed to Aristocrat for chasing the (Australian) dollar.