Learn How to Play Keno Online

Learn the basics of keno in our simple how to play guide – know the rules and bet types to crush online!

Keno was originally played in China back in the 18th century and since then has become a hit in the US and Australia. The game has taken off in Australia and can be found in pubs and bars all over the country. While the house edge is pretty high, there are some massive progressive jackpots that more than make up for it.

The rules of keno

Keno is a very simple game to understand, the online version of the game is a mixture between playing bingo and buying a lottery ticket.

Pick your numbers – You first pick a set of numbers on your slip – the amount of numbers you pick will depend on the keno game type.

Numbers drawn – After selecting your number the game begins. The online casino will start to pick random balls which are selected every couple of seconds. There are 80 balls to pick from with a unique number from 1 to 80 labeled on each. Twenty numbers in total will be picked.

Win – The amount of numbers you match will directly correlate to how much money you win.

Repeat – Once all the balls have been drawn and your winnings paid, you simply start again with a new ticket.

Types of bets for Keno

Keno has several betting options, these include:

Straight ticket – is betting all your numbers in a single bet. This is the simplest betting option in keno. More advanced players will combine this with other combinations of bets.

For example, a player may wish to pick 6 numbers in total and separate them into two different group of 3. This would make their betting slips at 2/3 and 1/6. If the stake of the bet was £1 this now becomes £3 because they have bets on: 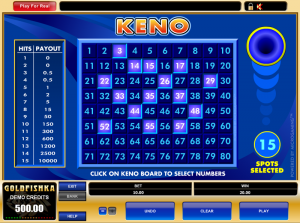 There is only one tip in keno which is this: don’t pick too many numbers. The more numbers you pick the worse chance you have of profiting. Advanced players stick to around 5 or 6 numbers because they find this to be the optimal amount.

New players believe that the more numbers they pick the better there chances are of winning. While it’s true you will hit more numbers if you pick more, the payout percentages will be much smaller than if you picked only 5 or 6.

Each keno game will have it’s own unique return to player (RTP) which is usually around 96%. Aim to find the games that offer the highest RTP to improve your chances of winning big.

Each spin is generated randomly using a random number generator, there is no mathematical formula to the outcome of each game.

A keno progressive jackpot is constantly increasing as more people play a particular game. As mentioned earlier, the house edge on keno can sometimes be as much as 25%, which is pretty high compared to other games out there. To regain some of the edge, playing keno games that offer a progressive jackpot is the best way to even the playing field.

Yes, the house edge is pretty big but you only need to hit one progressive jackpot to be set for life.

Can you play keno on your mobile?

Unlike blackjack or roulette, keno is not that popular online. Many online casinos give you the chance to play keno via your mobile device or tablet computer but your options may be limited compared to playing on a desktop.

Keno is fun game that is picking up ground quickly and becoming a hit with all age demographics. The progressive jackpots on certain games alone make the price of admission totally worth it.

If you think you got what it takes to crack open a jackpot, every online casinos listed in this article offers several types of keno games offering you hours of fun.