http://peterabbott.co.uk/our-product/machine-screws/fax:01373451513 How to Play Online Poker 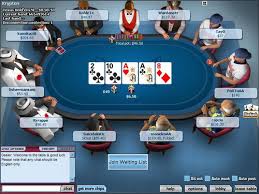 Poker is a mathematical game that involves both skill and luck. Unlike most casino games, online poker is played against other players and not the casino. Meaning if you are better than the other people at the table you should expect to make a nice profit.

The casino takes a small rake of around 5% per hand and lets you slug it out with other real life players to see who is king of the table.

Cordeiro The rules of poker

There are several variants of poker but this article will focus solely on Texas Hold’em, as it is the most popular and most played form of the game. Texas Hold’em can be played heads up which is 1v1, at a ‘6-max’ table which has 6 seats, or a ‘full-ring’ table which has either 9 or 10 seats.
A typical hand of poker plays as follows:

Cards dealt – Every person at the table is dealt two cards which cannot be seen by anyone else. Cards are dealt clockwise from the left of the dealer button.

Pre-flop action – Starts with the player sitting left of the big blind. The player has three options, they are:

Call – to match the big blind

Raise – which increases the size of the pot.

All players at the table will have the same decision to make. The hand will end if everyone folds except for one player (the winner of the hand). If the raise has been called by at least one player we go to the flop. We also go to the flop if someone has called without any further raises taking place.

Flop – The flop involves three cards which are placed face up on the table. These cards are known as ‘community cards’ and can be used by every player still in the pot to make a ranking hand.

Players will have the option to check, bet, raise, call or fold depending on the action.

Showdown – If two or more players make it to the showdown, they turn over their cards and the strongest hand wins the pot.

The hand rankings listed below work for all forms of poker except for games that provide ‘Hi-Lo’ variants. Hands are listed from strongest to weakest.

Four of a kind – As the name suggest, this hand has four cards that are of the same value. AAAA is the highest four of a kind with 2222 being the lowest.

Flush –5 cards which are of the same suit.

Three of a kind – Three cards of the same value. For example KKK or 888.

One pair – One card that matches another. For example JJ or 55.

High card– When you failed to make a hand, the highest ranking card in your hand or on community cards is your strongest hand.

The ace can be used as a high and low. If you play online, have this site open to keep your hand rankings on hand or print the picture below. 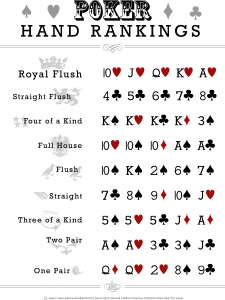 All online casinos that provide online poker will have a number of different stakes for you to play at. Whether you want to play a $0.10 tournament or a cash game with $10,000 stacks at the table – you can.

There are two types of games that poker casinos offer, they are:

Tournaments – Work by you paying an entry fee and been given a number of chips. These chips do not represent actual money but are used to place you on a leader board. Your aim in tournaments is to be the last player standing to scoop first place.

Most tournament structures pay out 10% of the prize pool. So in a 100 player tournament, the players who finish in the final 10 will receive a cash prize.

If you want to test your poker skills against other real life players then online poker is the way to go. Poker is one of the few games where you can buy in for $1 and leave $100,000.

To find out the best online poker casinos, each casinos listed in this article offers plenty of options and unique signup bonuses if you create a poker account today.

Shuffle up and deal!